Relics from the BBS ANSi age

In the early 1990s I spent many nights obsessing over my BBS and creating ANSI art to promote it.

The initial incarnation of my BBS was called Chaotic Hysteria, and ran on WWIV. I was 13-14 years old. I obtained the source code, written in C++, and learned how to use the search function in my text editor to find strings (segments of text output to the user) so I could tweak colors or make other aesthetic modifications. Bit by bit, I made this pre-web online destination more and more my own. I decided the focus of my BBS would be message forums and games, not files. (An easier decision to make when your modem is only 2400 baud). Topics ranged from music, movies, software and politics. The "miscellaneous" forum was named by my late friend Jim Gilliam: "Non-specific hullabaloo." Everyone had an alias, and mine was "-= CuLt =-" (complete with a flashing red L). My friends and I learned how to network our BBS's together so certain forums would exchange posts with little taglines attached indicating where the post originated from. It was a thriving, vibrant, mostly local community.

To my surprise, Chaotic Hysteria became wildly popular. Despite a 60 minute per day time limit, people often complained of a constant busy signal, even in the middle of the night. I attempted to address (and capitalize on) the situation by reducing the time limit to 30 minutes, and began charging a fee if you wanted to retain the 60 minute limit. When the first few checks began arriving in the mail, my parents didn't approve (how was I going to pay taxes?!), and that ended that. A downside of the popularity was that I could never use my own computer. This was a 386/66 PC clone running DOS, so multi-tasking wasn't a thing. Eventually, I grew bored and decided it was time for some radical changes.

I had been honing my ANSI art abilities, and admired the top ANSI art groups such as ACiD, iCE and TRiBE who regularly released their work in "art paks." Before long I changed my alias to "Dark Deception," was invited to join TRiBE, and rebooted my BBS with a focus on ANSI (and "Anarchy/CyberSpace" apparently). 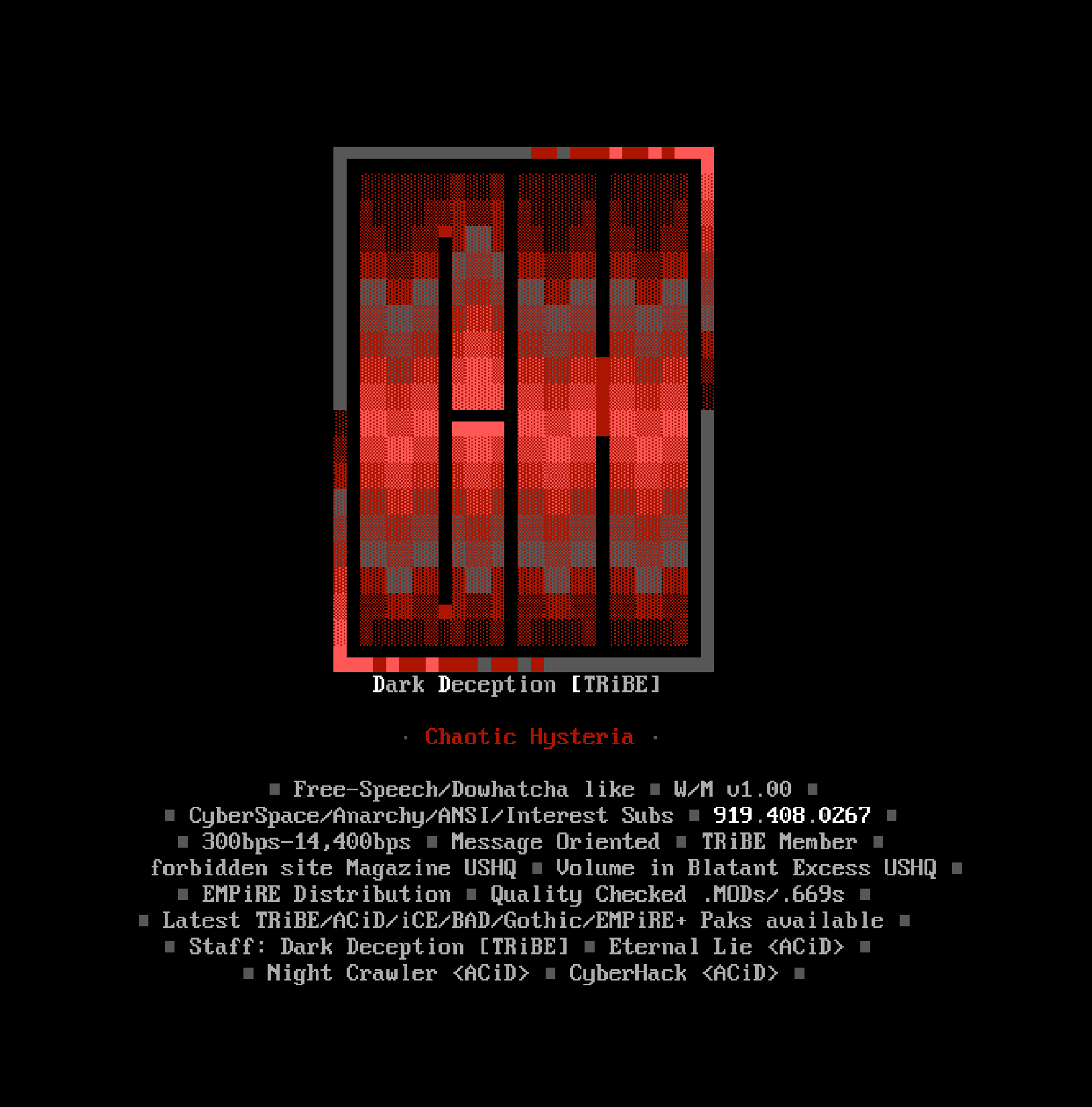 ANSI art for the second incarnation of Chaotic Hysteria

Before long I made the drastic decision to once again start from scratch and run the more "elite" BBS software ViSiON-X, followed shortly by ViSiON/2, and transformed the membership model to invite-only. I listened to my favorite metal albums, worked on ANSI and no longer had to worry about people on my computer all the time —activity practically ceased entirely. I obsessed even more about every pixel, but created a silent online palace. With all the free computer time I had, I accidentally ran up expensive phone bills calling BBS's outside of my local calling zone. The world seemed a lot smaller back then.

I missed the special community I once had, but instead of attempting to rekindle it, I shut Chaotic Hysteria down for good. Lessons were learned, and there was an exciting new frontier to explore where you could connect with people around the globe for free: the world wide web.

28 years later, I found myself reminiscing about this early online era in which things could disappear forever... or so I thought. It didn't take long before I found collectors of early digital art, including a few of my own. 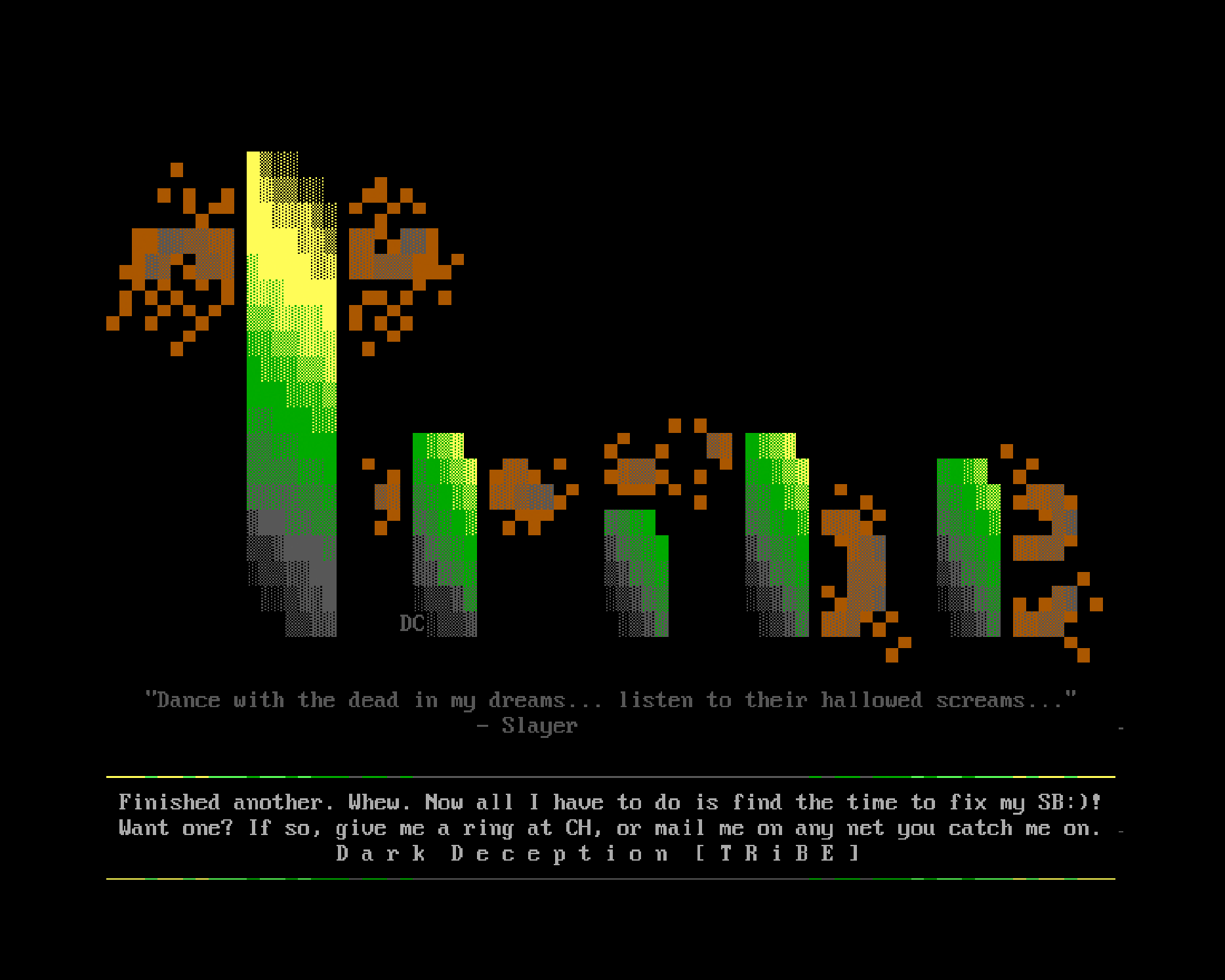 Promoting my ANSI art group, TRiBE. It's no mystery what my 14 year old self was listening to. 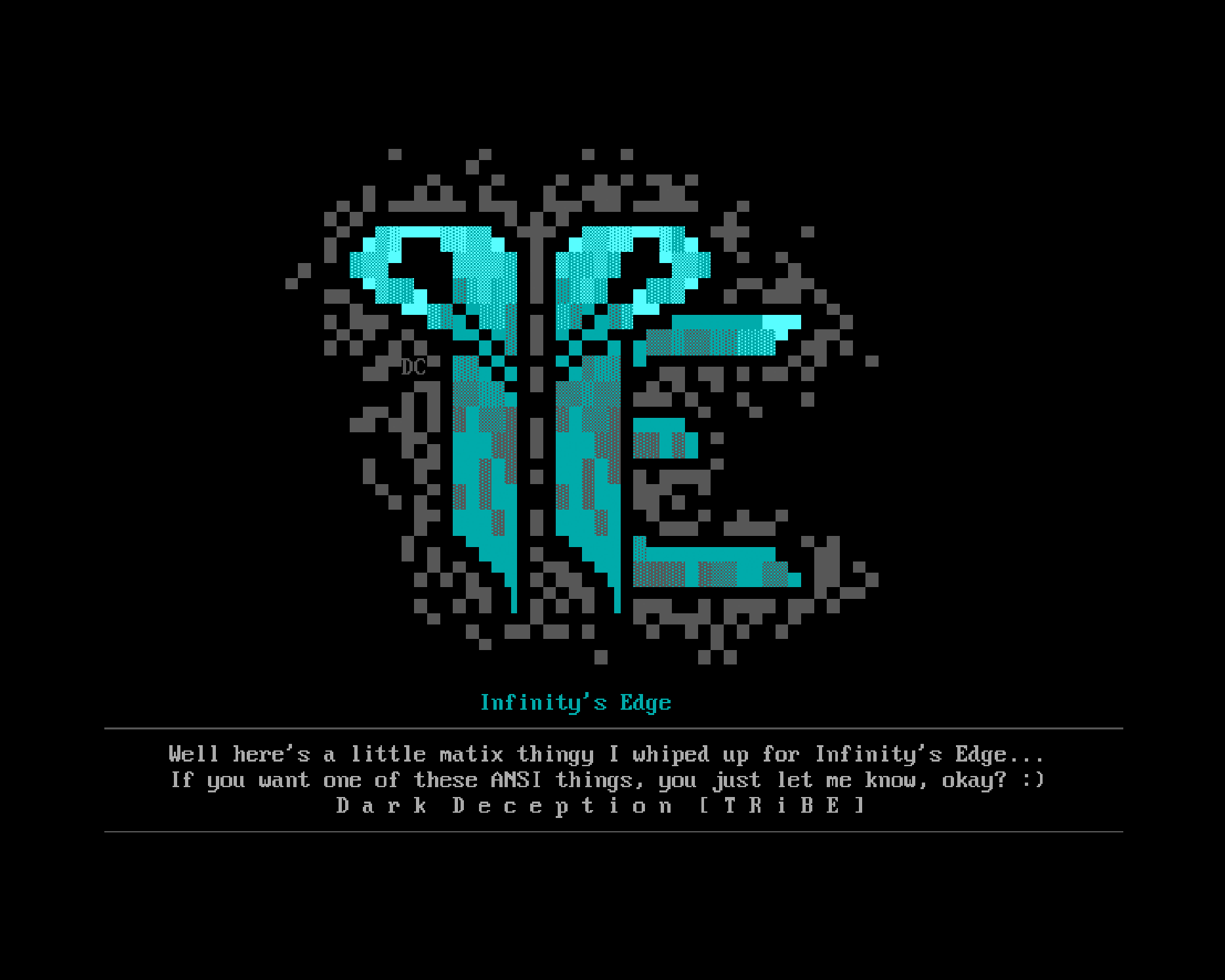 Created for my friend Jim's BBS. I have no idea what what "little matix thingy" means.

The work that awe requires

Nicole Sabouné emerges once again, For Us