In March 2020, I received an email from Andrea Chiodetti. A long-time friend, Andrea was one of the founding guitarists of the stellar Italian band The Foreshadowing. Quarantined in Rome, he began writing music as a catharsis to the emerging pandemic and asked if I wanted to collaborate. I too had begun quarantining in Brooklyn, and jumped at the opportunity. It was only 3 or 4 songs, and even though the end result might be purely for ourselves, it felt like an ideal way to process everything and get creative with a friend.

Andrea was unstoppable, and quickly the number of songs began to expand. Meanwhile, my personal life was uprooted. I relocated outside of New York City to wait and see which way the world turned, and dragged my electronic drum set along with me. While temporarily subleasing an apartment until figuring out the next temporary move, I converted a walk-in closet to a little studio. And in the next apartment, a tiny child-sized bedroom became the new recording spot. The daily conversations with Andrea and expanding musical landscape became a reliable thread against a backdrop of change.

Apparently neither Andrea nor I was the "no" person in this relationship, and I suggested something perhaps a little overly ambitious which ended up creating a logistical challenge. Since the experience of the pandemic is universal, everyone has their own story to tell. What if we had a different vocalist for each song? We created our wish list, and before long had a shared spreadsheet. Who's available, or is even interested? Which song is right for which person? Attempting to connect the dots felt a bit daunting. To our surprise, the concept was warmly received by nearly everyone we reached out to. The accumulating depth of talent fueled and inspired us. I eventually asked Egan O'Rourke to formally join the collaboration, and his contributions to bass and production are huge.

In November 2021, Egan flew out from his home near San Francisco to engineer the drum sessions with me at Nightsound Studios in Carrboro, North Carolina. In the weeks that followed, Andrea and Egan recorded all the final guitars and bass. 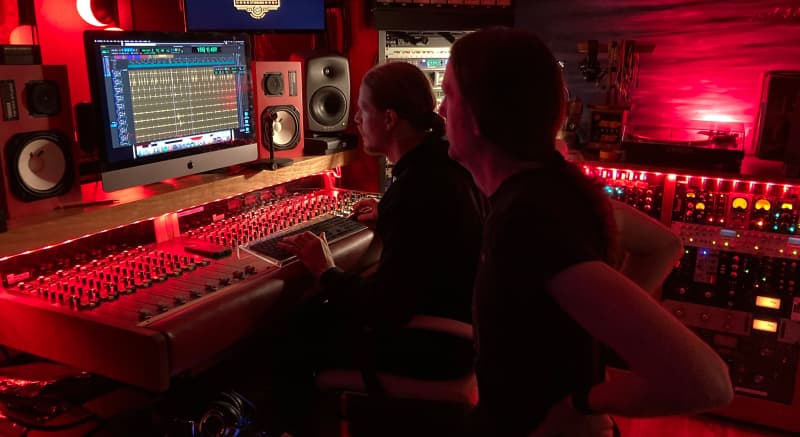 It's now January 2022 and we're starting to receive daily mixes and masters of the final songs. Listening to the songs polished and shining bright, it's hard to believe we've finally made it to this stage. Yesterday, we announced the project to the world and launched the website (also on Instagram and Facebook). We will be revealing vocalists involved in the project each Wednesday, starting next week.

Musically, elements of the participants bands shine through, though there's an entirely new identity formed within the chemistry of the ensemble as well. There's plenty of other "surprises" to mention once all the vocalists and other details are known as well.

We've decided to call this one-time project, born of a shared global experience something nobody will forget: MMXX.

If interested, sign up and follow along. We're currently exploring the best options for an official release and hope that the end result can be shared before too long.

Music from the pandemic

Moving on from NationBuilder